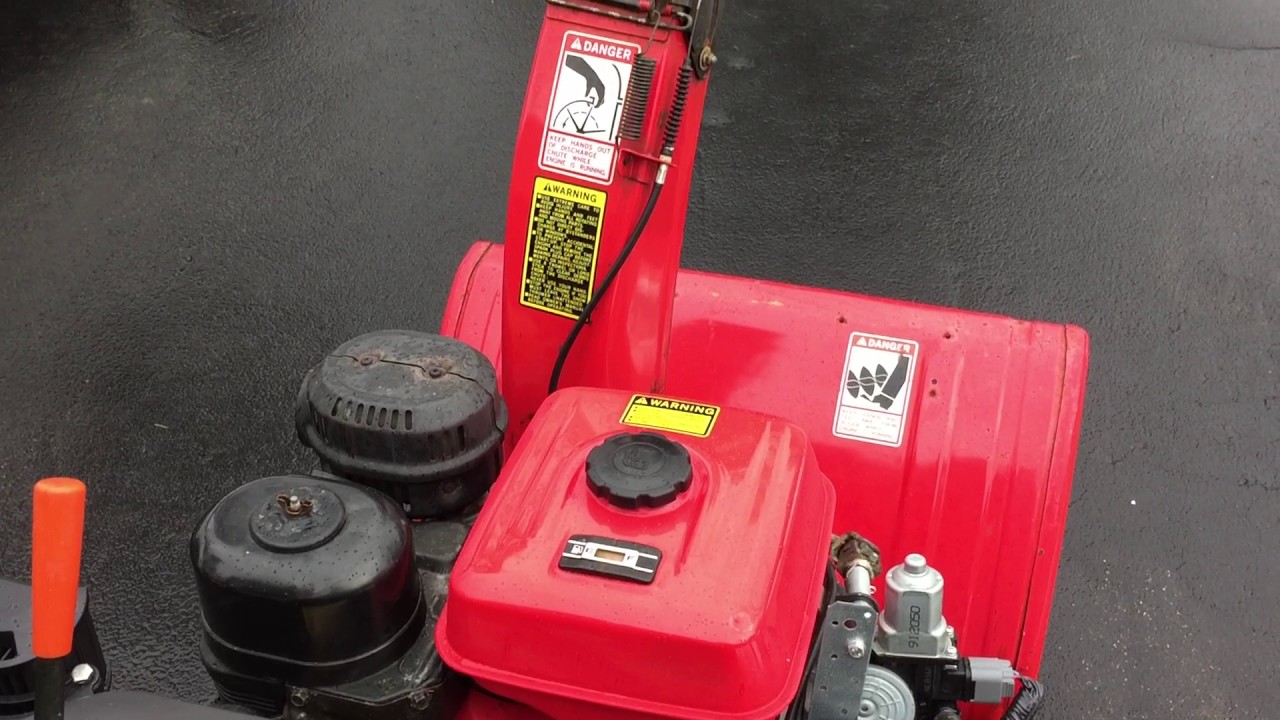 You are here: Home / Snow Blowers / How to Drain/Siphon Gas from a Snowblower

Most certainly, all of you will agree that a running hard and rough snowblower makes it disproportionately convenient to survive through winter. Avoiding a series of bad days next season is only possible if we are ready to house the snowblower in a way that will help it work perfectly for many winters to come.

I have found out some of the key guidelines that will help field concerns over the topic. Keep reading to learn the details.

To drain or siphon gas from a snowblower first, make sure the snowblower is cooled down. Remove the fuel cap and fuel filter. Adjust the siphon pump in the fuel tank. Let the residual fuel drain out through the opening into a gas storage can. Now drain the residual fuel from the carburetor bowl through the fuel drain and seal it properly afterward. Bring the blower into the service position. Let the snowblower run again for a few minutes before it stalls out itself. This shows the fuel system is dried up and you are good to go

How to Drain Gas from a Snowblower

Step 1: Turn off the system, Let it cool

Before you set to begin the process, turn off the snowblower and let it cool. Avoid taking any risk that may lead to physical or property damage. Also, gas is highly inflammable which calls for a need to choose a safe place that will not lead to a spark.

Open the fuel tank by removing the cap. A fuel filter is placed right beneath it. Take it out as well. Grab yourself a good fuel stabilizer. Add in a measured proportion of it according to the instructions given on the bottle. The quantity of the stabilizer has to equate to the quantity of fuel present in the tank.

If the gas is two weeks old already than stabilizing it won’t turn out to be a differentiator. So, you are advised to follow the third step right after completing the first one.

Step 3: Do the siphoning to remove gas

Put the gas siphon through the fuel tank and pump the gas out of it into a storage can. This process, as a matter of fact, is especially relevant when the gasoline fuel is two weeks old. However, if the fuel is not too old and you are determined to keep the container empty before storing it away, then go for it because this works either way. Try to pump out as much liquid out of the tank as possible by moving the tube around.

After siphoning out the fuel, let the snowblower run for few minutes so that the system is dried up and the fuel is burned completely. Let the system take a few minutes before it stalls out.

An alternative approach is to remove the fuel filter off the tank. Add the correct proportion of stabilizer to the already present fuel in the tank. Let the engine run for at least five minutes in order to advance the stabilized fuel throughout the system. Close the fuel valve and switch off the engine and continue to follow the third step.

Open the fuel drain of the carburetor bowl to let the residual drain into the storage can. Seal once you are done.

Step 4: Burn out the remaining gas

Start the engine again and burn the remaining gas. This will lead to an automatic shutdown of the engine.

Why is it important to drain out the fuel?

The answer to this question is a simple chemical reaction that goes on the inside of the fuel tank. It is ready to catch us off-guard if we persist in avoiding the dynamics of the system.

As it turns out, the gas-filled inside the tank consists of 10% ethanol. The ethanol gas is hygroscopic in nature and thus absorbs water. On coming in contact with the oxygen in the tank it oxidizes leaving behind a concentrated corrosive substance. The corrosive substance produced can clog the carburetor or leads to varnish and rusting of the fuel system. Understanding the concept will help us to be timely with the work and prevent the gasoline from breaking down.

Snow blowers at Jacks provides a guide that will help you understand the problem in detail, as well as suggest some useful tips that will clear things up.

When is the right time to drain gas?

Right before off-season storage is the right time to drain gas even if its stabilized. You would not want the gas to sit in for long because for how long the gas will behave well is not promised.
Also, two weeks old gas is not advised to be kept in the tank as this can lead to oxidation, varnish, or rusting of the fuel system. The stabilizer can not prevent the degradation of the old fuel. Which is why the gas has to be drained before use or off-season storage.

Information that can save you cost and effort

The snowblower has to kept away in a cool and dry place because you wouldn’t want any unwanted reaction to take place out of the blue. Place it at someplace off the ground or above the Mat to prevent damage from rain or melting snow.

It’s better to not risk the good condition of the snowblower by exposing it to the dirt and dust. This is why slow blower storage sheds are made available for those who are struggling with a limited garage space.

Storing fuel for a longer-term. Is it good?

There is both good and bad fuel and to answer this question first we need to understand their nature separately. Adding new fuel will extend its life span to 45 to 90 days or about 6 to 9 months. However, adding stabilizer to old fuel would not prevent it from deteriorating and decimating the system.

So, it’s better to never leave gas in a snowblower for an extended length of time.

How is mixing new gas with the old gas

New gas can be mixed with the old gas if it is not contaminated. We need to be cautious of the dirt or dust particles trapped inside and dispose of it in case the worry turns out to be real.
However, if such is not the case then diluting the old gas with new might work if the old gas has not lost its ability to perform and ignite the engine.

The durability of pure gas is between three to six months before it begins to evaporate and oxidize. So, make sure you do the timely work before the fuel gets old.

E10 blend is ethanol-blended gasoline that contains about 10% of ethanol in it and is mostly used for a snowblower. However, the quantity of ethanol does not imply the absence of risk. It is recommended to use ethanol-free gasoline for storing away small engines.

Other than the fuel system, other parts of the snowblower also require maintenance. Ariens blog will help you cover all the necessary steps required to be at your A-game next winter.

Contents show
How to Drain Gas from a Snowblower
Step 1: Turn off the system, Let it cool
Step 2: Stabilize the gasoline fuel
Step 3: Do the siphoning to remove gas
“Running the fuel system dry”
Step 3: Drain fuel from the carburetor bowl
Step 4: Burn out the remaining gas
Why is it important to drain out the fuel?
When is the right time to drain gas?
Information that can save you cost and effort
Health and safety measures
Storing fuel for a longer-term. Is it good?
How is mixing new gas with the old gas
How long can gas sit in a gas tank before goes bad
Ethanol-based blends or 100 percent gasoline?