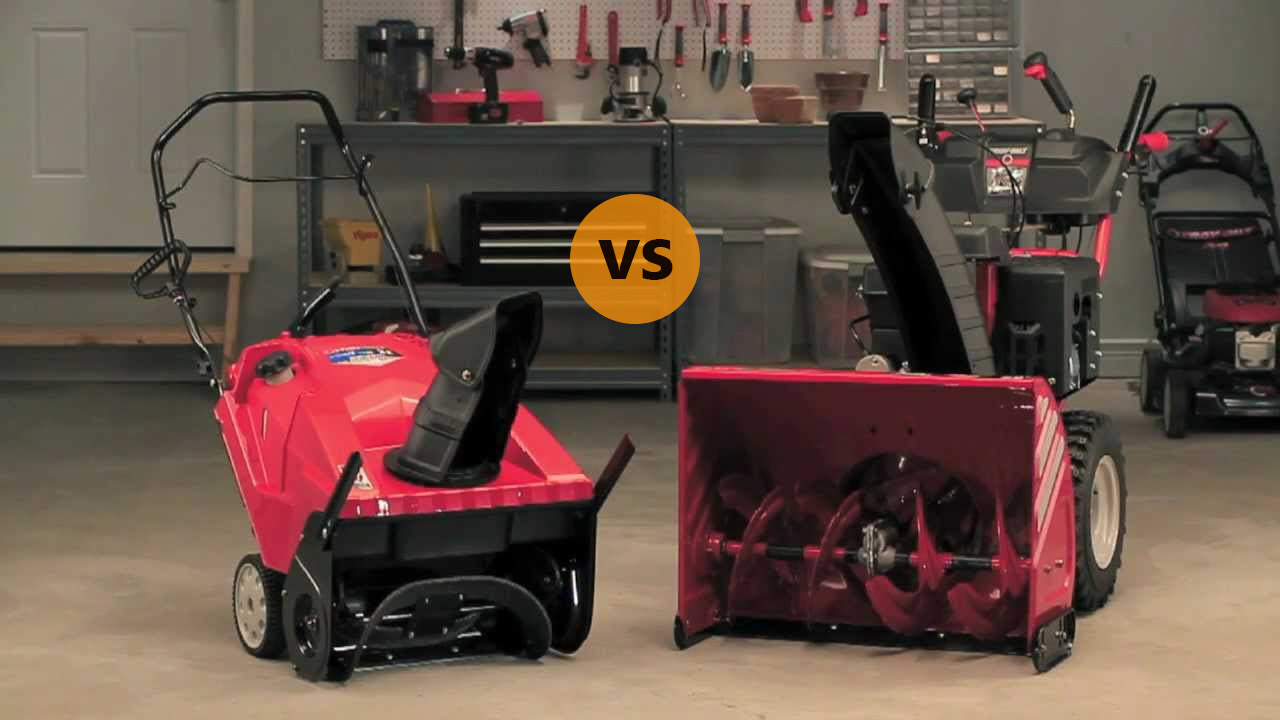 For a user, to be able to understand the snow clearing machines in terms of their performance and ability, can become a key differentiator. Especially when you are looking for a good fit that resonates best with your need.

This article covers the topic of snow blower vs snow thrower. So, what’s the main difference?

Snowthrower is a single-stage snow clearing machine that uses its rubber auger to pick up snow and expel it through the shoot in one go. Whereas a two-stage snow blower gets the work done by first feeding snow to the steel auger followed by a second stage in which the snow is taken up by a high-speed impeller. Which then throws the snow out faster and farther through the discharge chute.

The one-stage snow thrower machine is maneuvered through a paddle. The paddle motion then pushes the machine forward and scrapes the snow off of the floor. It then directly shoots it outside through a shooting gear. The paddle is a safe choice as it is made of rubber in case you are worrying over scratching through the surface.

Two-stage snow blower takes snow in through the auger and feeds it to the impeller. The impeller takes it forward and out through the metal shoot. You just have to adjust the gear and steer the machine, while it drives itself. This makes the whole process so much easier.

Weight of the one-stage and two-stage snowblower depends upon its size. The average weight ranging from small to large snow removing machine is between 35 to 30 pounds. You can tell from the size of the two.

A snow thrower weighs less because of its size and simple mechanism. However, the two-stage snow blower weights a lot more because of the inbuilt system and installation of heavy parts in it.

Two-stage snowblower works best for heavy, thick snow and a larger clearing area as it’s a two steps process that takes in the snow in a way that the process is made easy significantly. The snow throwing distance is of about 60 ft at a maximum and can handle snow accumulation length up to 6 to 12+ inches.

For a single-stage snow thrower, the path has to be small and paved because rubber auger comes directly in contact with the surface while you work.

The two-stage snowblower is meant for steep driveways and a wide clearing area.

while a two-stage snow blower has a clearing width of 26 inches. It has a steel cutting edge with adjustable skid shoes. But the cleaning process leaves a thin layer of snow on the surface and doesn’t do as good as a snow thrower in cleaning all the way to the ground. However, this won’t disrupt the performance.

A single-stage snow thrower has a rubber auger that directly rubs itself against the surface. So, it’s reasonable to say that it won’t be a nice choice for a gravel driveway or surface covered with dirt and grass.

Two-stage snow thrower works well on a gravel driveway and grass or dirt-covered surface as it has skid shoes on to adjust the cutting edge high above the surface. This will leave a film of snow on the surface but it won’t be significant enough to cause you trouble.

Single-stage snow throwers are powered by either an extension cord or a lithium-ion battery. In the case of the former, the movement is restricted by the length of the cord. While a thrower can run up to 20 to 45 min on a single battery charge.

Snowblowers are gasoline or diesel-powered machine, which continue to work as long as the engine does not run out of fuel.

Snow throwers are easy to maintain for the fact that they are small and battery-powered instruments. They won’t occupy much of a space to be stored away in the garage or a shed.

However, snowblower range in size from large to extra-large, which asks for enough room for storage. Also, a fuel-powered engine requires the user to be prompt and vigilant in taking care of the machine. The Fuel system, gasoline and spark plug should be maintained from season to season.

The price range is cheaper for snow throwers for the fact that they do not have a variety of features to offer. On average, the cost is observed to be around $150 to $900.

Snowblowers start from $400 and the price goes on to $2000 and above. However, A price tag defines the worth of a product only to a certain extent. Good Market research can help you pick out the best on an average price in both of the aforementioned cases.

To know your equipment better, check how snowblower works

What to look for in the snow removing machine?

Beware of a mental-checkout while buying the product because what’s the point of investing money in something which is not guaranteed to last longer. Doesn’t make sense, right? So, here are the three most significant questions that you need to ask yourself before making any decision.

You must have the answers to these by now. Just keep them in your mind and read the following guidelines. It will bring clarity to the thought even more.

Buying guide by Briggs and Stratton that you might want to touch on.

Which one is best for you?

You must have known the answer to it by now. Since you have been provided with all the relevant information. However, the point that must be made explicit here is that no snow clearing machine is the best choice for you unless it fits your need. You would never want to go overboard with the choice you make and this is why you must shortlist the one you wouldn’t trade anything with.

Check out this article by The spruce. You might hit on some useful information regarding the topic.

Contents show
9 Key Differences to Take into Account
#1 Maneuverability
#2 Weight
#3 Coverage
#4 Path
#5 Clearing Width
#6 Adjustable cutting edge
#7 Energy Source
#8 Maintenance
#9 Price range
What to look for in the snow removing machine?
Which one is best for you?